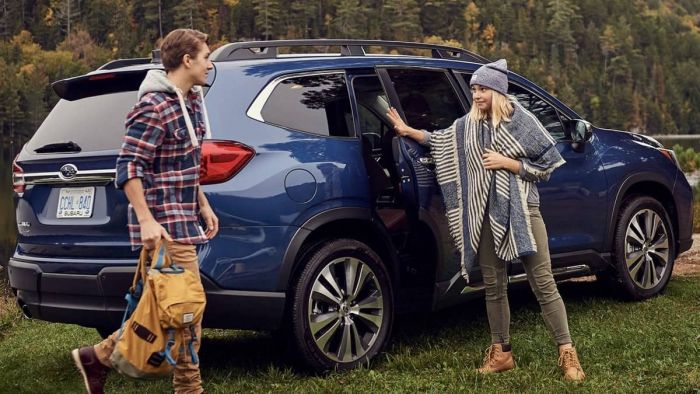 Big family? No problem! There are a number of suitable vehicles available to you in the USA if you find yourself at the helm of a sizeable family unit with a sense of adventure. One of the most notable automobiles you’ll stumble upon when looking for a solution for a sizeable bunch of relatives, or just friends, is the Ford Expedition. You can read the CarBuzz review on the 2020 Ford Expedition here. There is also the Chevrolet Tahoe and the Toyota Sequoia to consider, but if you’re willing to venture into somewhat less exciting minivan territory, either the Chrysler Voyager or the Kia Sedona might tickle your fancy.

Let’s stick to the sport utilities though, taking a closer look at each of the three options mentioned so that you can make an informed decision on which of these large rides is best suited to take your large family on its next road trip.

First up, the Ford:

The Expedition is a big SUV – Ford’s biggest, in fact, and at 210 inches long, 79.9 inches in width and 76.4 in height, you could be forgiven for thinking you might need a skipper license to pilot this thing around. That significant size translates very nicely into a cavernous interior, though, with three rows of seats and ample room for eight inside, thanks to three full rows of seats. Moreover, it boasts best-in-class third-row legroom at 36.1 inches.

Drivetrains include two and four-wheel drive derivatives, with both choices being available even on the most basic spec. Power to the wheels comes courtesy of a 3.5-liter twin-turbocharged V6 EcoBoost engine that produces 375 horsepower and delivers 470 lb-ft of torque in all models, except in the top-tier Platinum where it is tuned to deliver slightly more grunt and puts out 400 hp and 480 lb-ft. Transmission of gears is handled by a ten-speed automatic across the board. Given the size of the vehicle and just how much metal there is to move, 3.5 liters might at first seem a little on the small side for its power unit, but as those numbers show, thanks to Ford’s EcoBoost tech the figures compare nicely with larger-displacement rivals. One of the main benefits of the Expedition is its massive towing capacity, which means even if you exceed the ample cargo room and need to tow a trailer or wish to go caravaning, this thing will handle the task without a fuss.

The range comprises five trims, with the fleet-only XL at the entry point. The base model for the private purchaser is essentially the XLT which packs its considerable infotainment functionality into an eight-inch touchscreen up front. Features include Sync 3, Apple CarPlay and Android Auto functionality, voice recognition, and an endlessly handy Wi-Fi hotspot. A trim level further up the Limited adds a premium 12-speaker Bang & Olufsen sound system, while further up the range on the King Ranch and Platinum, you’ll find sat-nav and SiriusXM functionality as standard (which can be added on to the lower trim levels), with the range-topper boasting that aforementioned extra power. The 2021 version retails at between $49,995 and $73,775 MSRP.

Directly comparable to the Ford is Chevrolet’s imposing sport utility, the Tahoe. It is right on par price-wise, with a range between $49,000 and $72,600 depending on which of the six trim levels you opt for. It boasts many of the same benefits, from room for eight in a spacious interior (it has slightly better front-seat legroom than the Blue Oval’s offering and slightly worse legroom in the back seat), infotainment suitable for a full house of occupants, considerable towing capacity, and a powerful engine to lug all that metal around.

The engine is an area in which the two differ, though. Where the Blue Oval opted for a smaller forced-induction V6, Chevrolet has stuck with larger displacement V8s on the gas front. The LS, LT, Z71, RST, and Premier derivatives come standard with a 355-hp 5.3-liter V8 while the range-topping High Country is motivated by a 6.2-liter V8 that delivers 420 hp. Interestingly, all configurations except the Z71 are available with an oil-burner in the form of a Duramax three-liter turbodiesel that churns out 277 hp and 460 lb-ft of torque, which Chevrolet claims is the only diesel on offer in the full-size SUV segment. Gearing is taken care of by a ten-speed auto ‘box in all units and each is available in two or four-wheel drive.

Falling into the same eight-seater full-size sport-utility segment as both the Expedition and the Tahoe, you’ll find the Toyota Sequoia. It is more dated than the first two SUVs discussed here, both inside and out, but it does offer a main benefit over them – it is rather talented off-road. Now, that is not to say the 4×4 configurations of the others can’t venture off the beaten track; they’re proficient on the rough stuff and definitely can tackle some of the same obstacles, however, this is Toyota’s wheelhouse. Furthermore, with the Japanese manufacturer’s renowned reliability to bank on, the Sequoia certainly lends itself confidently to the more adventurous bunch.

This is especially true of the new TRD Pro, which focuses on off-road performance. It has a lifted suspension with Fox internal bypass shocks, plus further upgrades that collectively improve the already adequate 4×4 capability of the vehicle. Other models in the range include base model SR5, the TRD Sport, Limited, TRD Pro, and the range-topping Platinum.

All are powered by the same mighty, but thirsty, 5.7-liter V8 gas motor that sends its 381 hp and 401 lb-ft to either the rear or all four wheels (with the exception of the TRD Pro where the only drivetrain option is four-wheel drive). Shifting duties are handled by a hardy six-speed auto across the entirety of the range.

Presented here are some different approaches to transporting a large number of people around, and while that transport could be a quick A to B dash for the daily school run with kids and classmates carpooling, the substantial SUVs are really destined for adventure. Some are perhaps more suited to the city-slicking type of road trips while one in particular stands out as being better suited to those families with a more adventurous nature. One thing that is for certain is that whatever adventure lies in store for your sizeable family, there is an equally sizeable SUV out there built for the task.